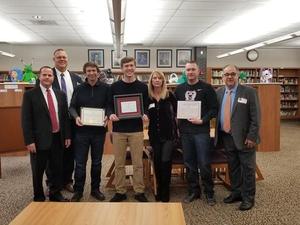 Rhys Long, a senior at Central Cambria High School, has received a Letter of Commendation from the National Merit Scholarship Program.
Rhys performed in the top 50,000 students out of 1.5 million nationwide who took the PSAT/NMSQT in 2018. This places Rhys in the top 3% of all students nationally. In a ceremony held at CCHS on Friday, Rhys received his Letter of Commendation, as well as a letter of commendation from Congressman Glenn Thompson and Commissioner Thomas Chernisky.